1. “Writing for me is a kind of compulsion, so I don’t think anyone could have made me do it, or prevented me from doing it.”

2. “I was set free, because my greatest fear had already been realized, and I was still alive, and I still had a daughter whom I adored, and I had an old typewriter and a big idea. And so rock bottom became the solid foundation on which I rebuilt my life.”

3. “You have to resign yourself to the fact that you waste a lot of trees before you write anything you really like, and that’s just the way it is. It’s like learning an instrument, you’ve got to be prepared for hitting wrong notes occasionally, or quite a lot, cause I wrote an awful lot before I wrote anything I was really happy with.”

4. “I think writing about the time in Hermione’s life that I write about – growing from childhood into womanhood, literally, I think it brought back to me how very difficult it is. So much is expected of you as you become a woman, and often you are asked to sacrifice parts of you in becoming a girl, I would say. Hermione doesn’t.”

5. “There’s always room for a story that can transport people to another place.”

6. “I think that perhaps if I had had to slow down the ideas so that I could capture them on paper I might have stifled some of them.”

7. “I’ve been writing since I was six. It is a compulsion, so I can’t really say where the desire came from; I’ve always had it. My breakthrough with the first book came through persistence, because a lot of publishers turned it down!”

9. “Very early on in writing the series, I remember a female journalist saying to me that Mrs Weasley, ‘Well, you know, she’s just a mother.’ And I was absolutely incensed by that comment. Now, I consider myself to be a feminist, and I’d always wanted to show that just because a woman has made a choice, a free choice to say, ‘Well, I’m going to raise my family and that’s going to be my choice. I may go back to a career, I may have a career part time, but that’s my choice.’ Doesn’t mean that that’s all she can do. And as we proved there in that little battle, Molly Weasley comes out and proves herself the equal of any warrior on that battlefield.”

10. “I always advise children who ask me for tips on being a writer to read as much as they possibly can. Jane Austen gave a young friend the same advice, so I’m in good company there.”

11. (talking about her characters and scenes) “I imagine them very clearly and then attempt to describe what I can see. Sometimes I draw them for my own amusement.”

12. “I can write anywhere. I made up the names of the characters on a sick bag while I was on an airplane. I told this to a group of kids and a boy said, “Ah, no, that’s disgusting.” And I said, “Well, I hadn’t used the sick bag.””3

13. “I just write what I wanted to write. I write what amuses me. It’s totally for myself. I never in my wildest dreams expected this popularity.”

14. “During the first five years that I was writing the series, I made plans and wrote small pieces of all the books. I concentrate on one book at a time, though occasionally I will get an idea for a future book and scribble it down for future reference.” 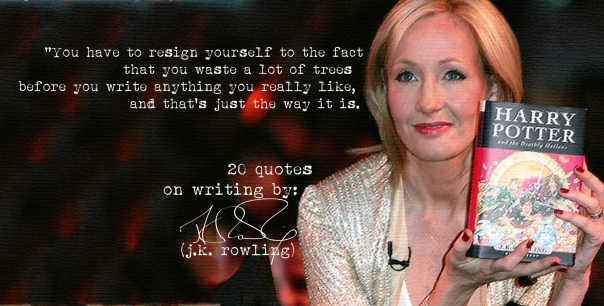 15. “I write nearly every day. Some days I write for ten or eleven hours. Other days I might only write for three hours. It really depends on how fast the ideas are coming.”

16. “Be ruthless about protecting writing days, i.e., do not cave in to endless requests to have “essential” and “long overdue” meetings on those days. The funny thing is that, although writing has been my actual job for several years now, I still seem to have to fight for time in which to do it. Some people do not seem to grasp that I still have to sit down in peace and write the books, apparently believing that they pop up like mushrooms without my connivance. I must therefore guard the time allotted to writing as a Hungarian Horntail guards its firstborn egg.”

17. “I’ve only suffered writer’s block badly once, and that was during the writing of Chamber of Secrets. I had my first burst of publicity about the first book and it paralysed me. I was scared the second book wouldn’t measure up, but I got through it!”

18. “I didn’t write with a target audience in mind. What excited me was how much I would enjoy writing about Harry. I never thought about writing for children — children’s books chose me. I think if it is a good book anyone will read it.”

19. “Read a lot. Reading really helps. Read anything you can get your hands on.”

“20 years ago today a world that I had lived in alone was suddenly open to others. It’s been wonderful. Thank you.“